Super Soaker: Results Published
The results of the Super Soaker experiment have been published. The combination of the experimental and modeling effort reveals the role of water vapor in contributing to cloud formation through the combination of both induced cooling and an increase in the humidity and the frost point. Results are discussed in reports from AGU-EOS, NASA, Science News, and Fairbanks Daily News Miner. The research article can be found on the PUBLICATIONS page (Collins et al., 2021).

COVID-19
The semester just ended here at the University of Alaska Fairbanks. ATM101 wrapped up across the state. Commencement is online on May 23. We are continuing our research efforts following university, state, and federal regulations through the COVID pandemic. 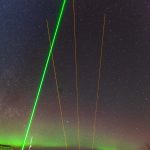 The Polar NOx   rocket investigation was led by Scott Bailey from Virginia Tech and launched early on the morning of January 27, 2020. The   investigation used stellar occultation to measure Nitric Oxides (NOx) in the upper atmosphere. Rayleigh and resonance lidars were operated during the rocket campaign to characterize the thermal structure of the atmosphere during the launch. NASA story and   mission summary. (Photo courtesy of D. Gehrke). 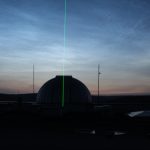 As part of the LCAGe project we conducted an intensive observation campaign. With Biff Williams visiting from GATS, Jennifer Alpach, Jintai Li and Richard Collins made Rayleigh lidar and sodium resonance wind-tempertaure lidar observations in August during displays of noctilucent clouds (Photo courtesy of J. Alspach).

Poker Flat 50th Anniversary
On March 9, 2019 we celebrated the 50th anniversary of the first rocket launches at Poker Flat (Tuesday March 4, 1969). Over 800 members of the public visited the range, and we provided lidar tours past midnight.   Local NBC affiliate Channel 11 visited the lidar lab and interviewed Jennifer Alspach. You can watch the story here.

LCAGe-2: Winter Campaign 2018-2019
As part of the LCAGe project we conducted an intensive observation campaign. With Biff Williams visiting from GATS, Jennifer Alpach, Jintai Li and Richard Collins made intensive Rayleigh lidar and Sodium Resonance Wind-Tempertaure lidar observations in December-January.   A Sudden Stratospheric Warming (SSW) event occurred in late December, and the observations are being analyzed to investigate the changes in the circulation associated with the SSW .

Great Alaskan Railroad Journeys
Michael Portillo visited Poker Flat in summer of 2018 to see the rockets and lidars for an episode of this BBC show. The episode aired in the UK in February 2019 and is expected to air in the US later. Episode Details .

MTeX: Results Published
The scientific results from the MTeX campaign have been published in November in the Journal of Geophysical Research (Triplett et al., 2018). The MTeX results show reduced turbulence associated with reduced gravity wave activity and suggest systematic reduction of turbulence in the wintertime Arctic middle atmosphere. The paper can be accessed on the PUBLICATIONS page.

LCAGe-1: Fall Campaign 2018
As part of the LCAGe project we have just conducted an intensive observation campaign. With Biff Williams visiting from GATS, Jennifer Alpach, Jintai Li and Richard Collins made intensive lidar observations during an extended period of clear skies between September 27 and October 3 (September 28-October 3, UT). You can click on the first-look summary plot is posted below showing the sodium layer over the nearly 6 days. The data set featured two periods with full daytime and nighttime observations. The data is being analyzed to investigate waves and tides using the sodium and temperature and wind derived from the lidar measurements. Observations will continue through the winter.

College of Natural Science and Mathematics

Institiute of Electrical and Electronics Engineers

Iluminating the Arctic atmosphere with lasers